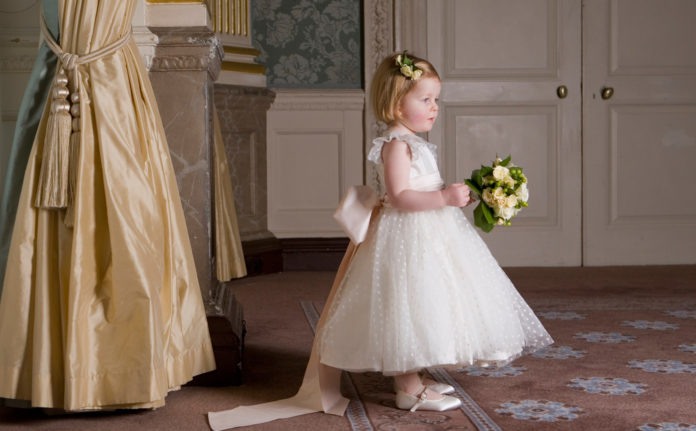 Like a real-life fairy godmother, Nicki Macfarlane transforms little girls and boys by creating outfits fit for the palace. The story of how her kitchen-table concern became an international business is equally magical

Nicki Macfarlane is living proof that it is possible to go from kitchen-table start up to international business. Her beautiful bridesmaid dresses, which are every young girl’s fairytale fantasy, also captured the hearts of the world at the wedding of the Duke and Duchess of Cambridge.

Nicki’s gift for sewing was always there. At school, she managed to bunk off lacrosse and spent that time sewing: “It was definitely in the blood, my mother embroidered beautifully”. Such was Nicki’s skill that she received an embroidery award from the Queen Mother at St James’ Palace.

She always sewed for herself and other people, but her business proper began around a decade ago. She says: “I agreed to make the outfits for a wedding where there were 22 bridesmaids and five, or was it eight, page boys”. Nicki took on this monster commission, although she was in the process of moving house. It was, she recalls, impossible to find a corner of her cottage unadorned with bridesmaid regalia. Charged with shepherding the army of attendants – only one older than five – to Sherborne Cathedral, she and her minibus of charges ended up being dropped out of town due to road closures. So Nicki marshalled three score tiny children through town, counting every one safely into the cathedral.

Despite this harrowing initiation, Nicki didn’t lose her nerve. The outfits were a huge hit and her reputation grew. At first, the business was commission only. The switch to RTW happened when her daughter Charlotte came on board: “Charlotte had worked with Lulu Guinness from the very beginning rising to global managing director for the brand. It was a huge asset to have her on board as she had the expertise I lacked”. Nicki says their working relationship has been a huge part of the success story. “We are almost telepathic. Without even discussing something – a fabric say – we will both reach the same decision. Both of us agree on what works”.

The approach at Nicki Macfarlane is to use the very best fabrics and then create timeless, age-appropriate styles that will still shine in the photo album in 30 years’ time. While the bridesmaid side – and smart page boys – is huge, the label is also a go-to for communion and occasion outfits. The range is stocked in fine boutiques from Azerbaijan to USA, also shipping to private clients worldwide. There are some variations across markets, so whites and pales and some bolder colours are in the mix. Recently introduced subtle pattern is proving successful for all markets.

For made-to-measure, there is an even broader range of fabrics and colours, as well as lace, embroidery and beading. Nicki says: “It is the whole bespoke process – with toiles, fittings and special details”. The London boutique, just off the King’s Road, has a cosy private room set aside for this, while the racks of RTW outfits across the two-storey store are a dressing-up-box paradise of silk and tulle.

Creating the Royal Wedding flowergirl outfits was special. Nicki says: “It was such an exciting time, but of course Charlotte and I were sworn to secrecy. Friends must have thought we were mad because we were behaving so mysteriously and kept disappearing. We were so incredibly proud to be a part of the occasion”.

While those gowns attracted huge acclaim, it is the Britishness of the Nicki Macfarlane brand that people love. “The first thing buyers want to know is where our garments are made,” says Nicki. “The fact they are handmade in Britain, in our own workrooms, counts for such a lot.”