When it comes to wedding traditions, the white wedding dress is perhaps the most universally recognisable symbol of marriage. It has a history dating back to the 18th century and it remains the classic look today. The Victoria and Albert Museum’s recent major exhibition reveals its fascinating history – and shows that many bridal fashions today are based on designs our grandmothers wore

London’s Victoria and Albert Museum began collecting examples of wedding attire in 1900, and its fascinating archive reveals that, while fashions in what we wear to get married may appear to change, many elements we think of as contemporary appear in some of its earliest dresses.

In the 18th century aristocratic and wealthy brides favoured silver, white or a combination of the two – but then these were also popular colours in typical day dress for these sectors of society. In the 19th and early 20th centuries, a white wedding dress was strictly for the well-to-do and most wedding dresses were worn again – usually for Sunday best. Fortunately for fashion historians and archivists, even then some brides chose to preserve them because of their significance.

It is only in the 20th century that the white wedding dress began to be adopted as a universal wedding constume and its popularity has spread over time – fuelled in part by the globalisation of fashion trends. It is the period from 1914 onwards where we see most parallels with today’s wedding fashion. Initially, bridal styles followed evening rather than daywear styles, especially during the interwar period (1918-39). In the 1920s, metallic lamés, lace, gold and shell pink fabrics added glamour to dresses, while the classic white satin dress became popular during the uncertain economic years of the 1930s. We also began to see adjustments to the hemline of dresses. Some designs were kneelength during the jazz and flapper years and they also followed the fashionable boyish silhouette of flattened chest and slim hips. In the 1930s – in keeping with tough economic times – the focus was on plain and more practical styles that could be adapted (for instance dyed after the wedding).

Society weddings were a perennial source of fascination. The 1933 wedding of the Duchess of Argyll brought traffic to a standstill outside Brompton Oratory, as people jostled with photographers in a bid to see the bride and her nine attendants. The sheath gown created for her by the young couture designer Norman Hartnell (who would later design for the Royal Family) included a twelve-foot train for maximum impact in the aisle. Trimmings included cutwork orange flowers embellished with pearls and bugle beads.

At the end of the 1930s, there was a distinct change of silhouette. Leg-of-mutton sleeves, pinched waists and a flaring basque – as seen in a wonderful and rare V&A sketch by the House of Paquin – conjure up theatrical glamour that was the hallmark of this period. Wartime meant brides had to be imaginative and practical. While some brides married in suits, a more romantic survivor of this era featured in the exhibition is made of lightweight upholstery fabric dotted with yellow flowers – an innovative solution to the problem of finding enough white fabric in an era of rationing.

Post-war fashion – along with wedding fashion – was hugely influenced by Christian Dior’s 1947 debut fashion show, which launched what became known as the ‘New Look’. Cost and materials remained an issue in the post-war years in Britain – Hardy Amies’ 1953 design looks every inch the 1950s shape, with its nipped in waist and full skirt, but it was created for Britain’s Cotton Board to show the glamorous potential of this everyday fabric. Leading London couturiers, such as Amies, Hartnell and John Cavanagh, earned their living and reputation designing for society, but they also reached out to brides on more modest budgets – and many brides made their own dresses, often to patterns created by top designers such as Cavanagh.

There was a distinct return to fairytale styles in the 1980s, while the 1990s revitalised the links between wedding gowns and catwalk fashion. Today, the white wedding dress remains the most popular choice. As Edwina Ehrman, author of The Wedding Dress – the book published in association with the exhibition – puts it: “Women who have worn white for their weddings talk about its romantic, fairy-tale appeal and talismanic qualities, but above all of how it miraculously transformed them into a bride”.

Adapted from The Wedding Dress by Edwina Ehrman (V&A Publishing), a book that accompanied a major exhibition ‘Wedding Dresses 1775-2014’, held at the Victoria & Albert Museum in 2014-15.  All images courtesy of Victoria and Albert Museum. vam.ac.uk 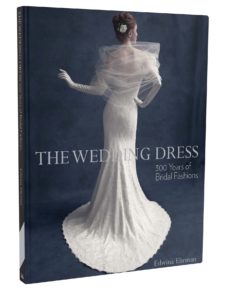