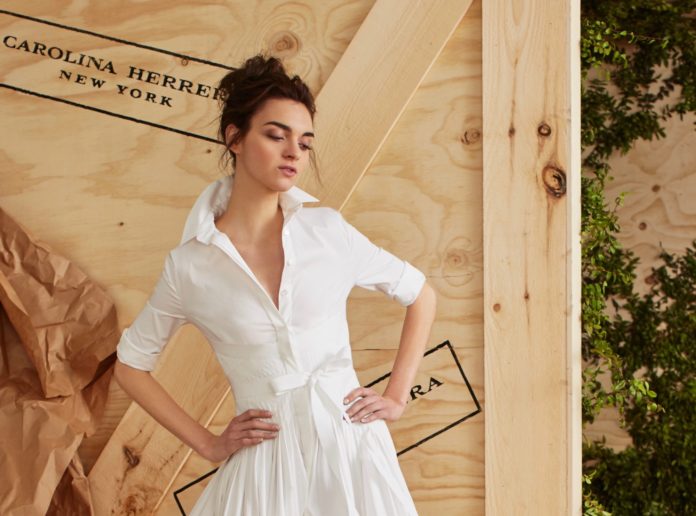 Good news for fans of the iconic New York designer Carolina Herrera. Her elegant wedding gowns are now available in London again, exclusive to The Wedding Club in Knightsbridge

[dropcap]C[/dropcap]arolina Herrera’s bridal range has returned to London, launching last week at The Wedding Club in Knightsbridge. And it’s good to see it back in town after several years’ absence because the New York-based designer’s collection has contemporary and elegant style credentials that are a perfect match for smart brides.

The Wedding Club launch was the first international showing of the spring 2017 collection following its New York preview. Displayed against the boutique’s chic all-white interior, and with bold spring flowers by Paul Furness of Petal to the Metal, you could appreciate the breadth of subtle colours, textures and details within this fabulous collection. London wedding photographer Kate Nielen, who was among the press visitors at the launch, captured the rails of glamorous gowns.

Standout interpretations of the wedding dress include a crisp trench gown (shirt dress) with pin-tucked detailing – a reminder of Carolina Herrera’s own signature look, the perfectly tailored white shirt. A glam silk crêpe wedding trouser suit is another edgy choice, while brides in search of more traditional shapes will find fluid ballgowns and sculpted skirts in the collection. Classic House of Herrera signatures such as bows and grosgrain ribbons add a flourish of romantic fine detailing. Even the most form-fitting numbers have a level of refinement that shows why Carolina Herrera remains a revered fashion name and go-to for red-carpet finery. Here is a designer who does gracious gowns to perfection.

Up close, the dresses are something very special. Carolina Herrera’s atelier in New York has a team schooled in haute couture techniques and it shows in the intricate textures, details and craftsmanship.

The team at the Wedding Club have much to celebrate with this latest addition to their stable of leading international bridal names. And there is no doubt that Carolina Herrera brings real star quality: distinctively New York, supremely elegant and offering the impeccable cut and finish that dream wedding dresses are made of.

This year is the 35th anniversary of the launch of the House of Herrera. Born and raised in Venezuela, Carolina Herrera was a key name in the New York fashion and social scene by the late 1970s  – famed both for her beauty and her impeccable sense of style. Mentored by legendary Harpers Bazaar and Vogue editor Diana Vreeland, she showed her first collection in 1981 at NYC’s Metropolitan Club.

While bridal did not officially join the fold until 1987, it was informally part of the runway mix from the early days. Famous Herrera brides include Caroline Kennedy (1986) and Olivia Palermo (2014), while the main label has been championed by a series of stellar names – among them First Ladies Jackie Kennedy and Michelle Obama, actors Zang Ziyi and Renee Zellweger and musician Taylor Swift.

Among Carolina Herrera’s many awards are Womenswear Designer of the Year in 2004, the Geoffrey Beene Lifetime Achievement Award in 2008 and the 2015 “Who’s On Next Fashion Icon Award”, presented by Mario Testino for her contribution to young designers and her wider influence on the fashion industry.

Writing about her fashion influence earlier this year, WWD’s Bridget Foley described her as: “a founding presence of the generation that put American designer fashion on the map”.  In the same WWD article, Carolina Herrera explained why bridal is so important to her work, saying:  “I love bridal, always…it’s full of hope and love”. carolinaherrera.com

About The Wedding Club

The Wedding Club was established in 2001 and specialises in RTW bridal with a focus on luxury and fashion-forward designs. The team travel extensively in search of the best bridal designs, stocking exclusive UK and international names including Suzanne Neville, Naeem Khan, Zuhair Murad and Berta.

The London store, located in Knightsbridge, welcomes brides from around the world on an appointment basis. These hour-long sessions are a chance to try on gowns with personal guidance from in-house stylists. To see the new Carolina Herrera collection, call +44 20 7581 9540 or email appointmentslondon@theweddingclub.co.uk. For more about the boutique and its designers, visit thewedding-club.co.uk