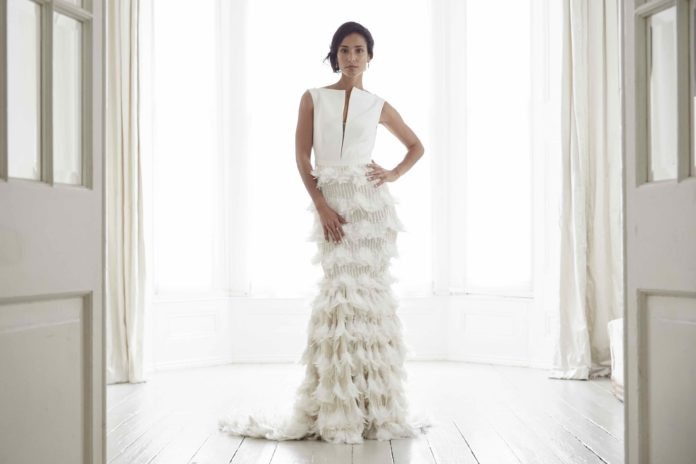 Founded in 2013, the fashion house of Savin London is a quintessential example of new British craft. The edgy-meets-timeless design aesthetic and in-house approach to all stages of production also make it one of London’s most exciting new bridal brands

Andrey Savin, founder and creative director of Savin London spent time in both his home city of Moscow and in Paris before choosing London as his base – and establishing his bridal business here was no matter of chance; he’d fallen in love with the place.

Andrey had plenty of opportunity to consider Paris – his family relocated there in 2001 and he worked for several French luxury fashion houses after studying business and economics. But he took the decision to gain further expertise via the London College of Fashion, where he began his studies in 2011. By the time he’d completed his training, he was sold on everything from the climate to the national drink. He says: “I love this country and being in London. I adore the weather and drink my tea with milk! From a business perspective, I also find that the people are honest and straightforward and it’s a logical society – which really helps when it comes to establishing and running a business”.

While his heart was with London, his head also told him that this was the right place to establish a new bridal business based around the concept of the modern bride. “Bridal is a very international market, but I’d say that London wedding fashion is more daring and brides are more open to fresh ideas than other European markets, which tend to be a little conservative.”

The Savin London approach is hands on and local. Andrey and his team of nine seamstresses manufacture everything in house in his London atelier in Greenwich. The focus is on limited runs and bespoke pieces and Andrey starts by finding the right quality raw materials. “We are not restrictive in our approach, so designs are dictated generally by what I find – I only work with exceptional fabrics and I don’t want a Savin gown to be one of many.”

Savin London can take advantage of limited-run fabrics because it is not producing on a mass, but an atelier scale. Most gowns are very limited run or bespoke. While silks and chiffons predominate, there are details in leather, feathers and even faux fur. There is a strong use of fine laces – from Chantilly to Guipure – and Andrey incorporates more technical fabrics on occasions. The resulting dresses are super-feminine and flattering, with a contemporary approach. While Andrey loves exploring edgy fabrics and their drape and detail possibilities, he is also influenced by timeless shapes, with everything from elegant shifts and separates to ballgowns in the mix.

At Savin London’s first showing at The White Gallery in 2015, there was an enthusiastic response from buyers and the press and Andrey’s first visit to the New York fairs produced a similar buzz. For Andrey, the key challenge is to remain in physical control of production of this very London brand. He says: “Each gown must be beautiful and memorable, and we don’t want to simply blend in. Most important of all, our dresses are designed to be worn and enjoyed by modern brides.”