So how much should you spend on an engagement ring, and who should choose it? A survey from Goldsmiths reveals that size matters less than quality of stone, that most brides would rather select their own ring…and Glasgow grooms are very generous

Jeweller Goldsmiths has tackled the trickiest of all subjects – what to spend on the engagement ring! Myths surround it, most notably that a groom should spend a month’s salary (three months’ salary according to some guides) on this symbol of love.

In fact, the Goldsmiths survey found a wide variety of opinions among couples about what to spend and even how to choose the ring itself, interviewing some 2,000 people around the UK to find out their opinions.

Choosing the perfect ring can be a tricky call, and although it may sound more romantic to surprise the bride on bended knee with a mystery jewel box, over three-quarters of women interviewed for the survey (77 per cent) said they would prefer to choose the engagement ring for themselves. This is good news for partners who worry that they will choose the wrong style or stone – especially since three-quarters of men interviewed said they would be hurt if a design they chose didn’t find favour.

The Goldsmiths survey found that quality matters more than the bling factor, with well over half (69 per cent) of women interviewed expressing the view that the quality of the stone matters more to them than its size.

Back to the old myth about spending a month’s salary. In fact, the survey found that many would prefer their partner to spend a more modest amount – £1,500 on average – on the ring. Perhaps this is because today many couples invest so much more in their outfits, the wedding party and the honeymoon adventure afterwards.

But if you are looking for a generous beau to add bling to your finger, Glasgow seems to be a good place to start your search. Over a tenth (12 per cent) of men interviewed there said they would look to spend over £5,000 on the engagement ring.

For Goldsmiths, one of the most interesting things about this survey was that couples are willing to talk more openly about how much to invest in the symbols of their relationship. Goldsmiths executive director Craig Bolton, says: “Brides to be being more impressed with quality than quantity when it comes to the stone in their engagement ring was a particular shock for us – but it’s brilliant that people are openly discussing what they are looking for in their ideal ring”.

One sure way to mark the moment and get it right is to select a holding ring – something Craig Bolton says has become increasingly popular in its stores – with grooms choosing a stone to pop the question and then making the final choice as a couple.

While couples may take a thoroughly modern approach to choosing the ring, over a half of those surveyed (52 per cent) do subscribe to the ‘something old, something new, something borrowed…’ tradition and like the idea of wearing a family heirloom on their wedding day.

To find out more about Goldsmiths engagement and wedding rings, visit goldsmiths.co.uk

Check out our pick of  engagement and celebration rings 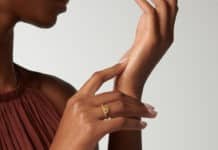